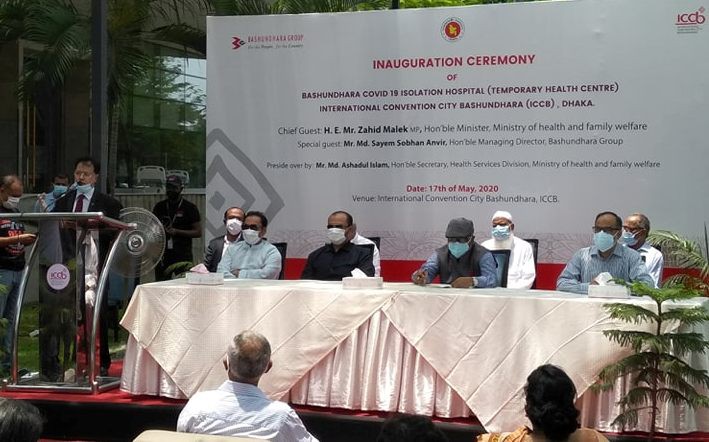 The country’s largest hospital for corona patients at the International Convention City Bashundhara (ICCB) in the capital has been inaugurated.

High officials of the government and the Bashundhara Group were also present in the event.

Initially, the hospital, named Bashundhara Covid-19 Isolation Hospital (Temporary Health Centre), will start its operation with 600 beds, and the govt has appointed a director, two assistant directors, 191 doctors and 10 office staffs so far for the purpose.

More doctors, nurses and other medical staff will be appointed to the hospital soon as the corona infections and deaths are soaring gradually, said hospital director Tanvir Hamed.

Bashundhara Group, a leading business conglomerate of the country, has come forward to establish a makeshift hospital for corona patients at the ICCB.

The Health Engineering Department of the government and the Bashundhara Group jointly implemented the project. The dream has come true within three weeks due to their relentless efforts.
Earlier, Bashundhara Group Chairman Ahmed Akbar Sobhan sent a written proposal to Prime Minister Sheikh Hasina to construct a makeshift hospital for coronavirus patients at the ICCB.

Initially, the hospital has accommodated 2,013 beds. The number of beds may increase to 5,000, depending on the number of corona patients.

It is learnt that the ICCB will have a 71-bed intensive care unit (ICU). The government will provide medicine, doctors, nurses and supporting staff to facilitate the treatment.

The medical cleansing plant is imported from Turkey while the hospital gets oxygen plant from the US Medical ventilators will be supplied from the central medicine reserve of the government.

Bashundhara Group has designated its trade centre with 150,000 square feet and four convention centres with 90,000 square feet for the noble cause of treating people infected with the deadly virus which has seriously affected Bangladesh like other parts of the world.

Meanwhile, the noble initiative of the Bashundhara Group to convert its trade centre and convention centre into a makeshift hospital has already been acclaimed at home and abroad.

They said the country’s largest hospital will contribute greatly to the treatment of coronavirus patients.